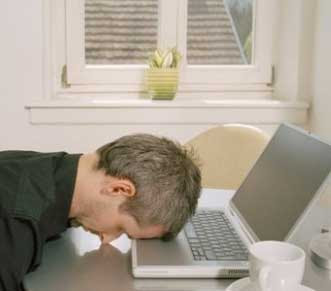 I've written four books and I can tell you, it's never easy. Sometimes your thinking isn't straight or your ideas haven't completely gelled. Sometimes the thoughts are in your head but they won't come out as words on a page. Sometimes you just don't feel like writing that day.

But I've discovered how to move forward even if your brain is muddled or the words won't form. The secret, I've found, is simply to do something, anything. Like Steven Wright says in his humorous way, if all you can do is the page numbers, then at least do that. Just get started. If the next chapter is too hard, work on an easier one, or go back and edit an earlier one. Once you're in motion, that small amount of momentum will continue to carry you toward your goal.

That's a lesson for accomplishing any major task in life. Don't just sit there; stand up on your feet. Get dressed for the day. Take the first step. If all your ducks aren't in a row, at least get two of them lined up. Once you're moving, you'll be able to do the next thing, and then the thing after that. Before you know it, the job will be done.
Posted by Scott Farnsworth at 9:02 PM