"Just imagine how different the world could be if we all spoke to everyone with respect and kindness."  Holly Branson 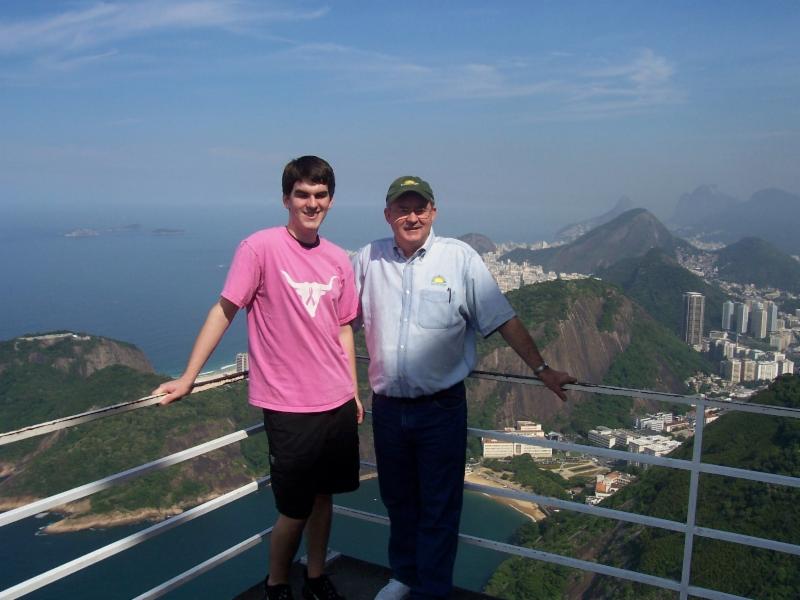 In 2011, my son Paul and I visited Rio de Janeiro, where I had lived for two years when I was a young adult. Rio is an absolutely gorgeous city with world-class beaches like Copacabana and Ipanema, 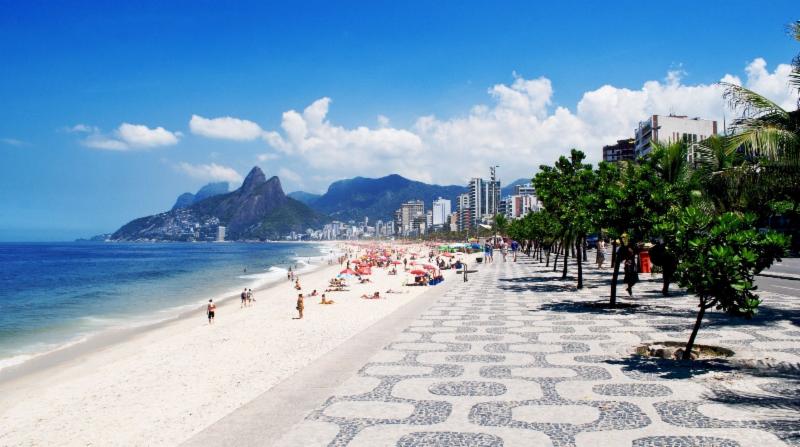 and first-rate tourist sites like Sugar Loaf and Corcovado - the stunning mountain peak overlooking the city on which the "Christ the Redeemer" statue stands. 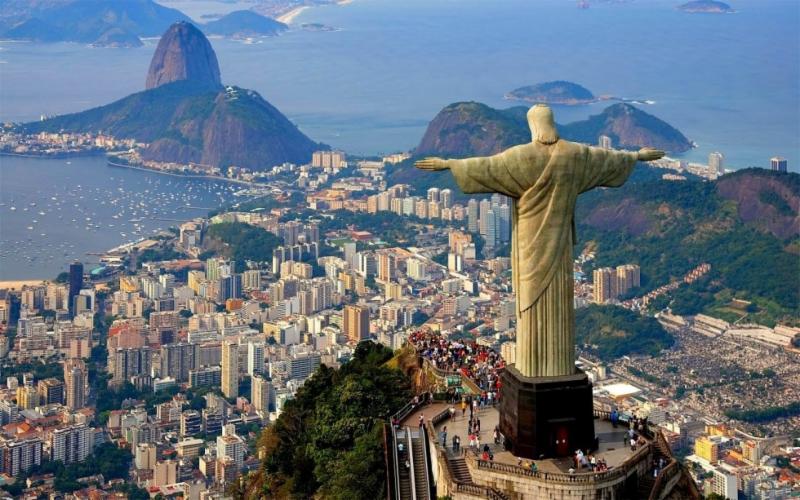 Interestingly, for Paul the most memorable part of our visit to the Cidade Maravilhosa - the Marvelous City - was not the breathtaking beaches nor the jaw-dropping vistas from Corcovado and Sugar Loaf. It was our visit to a "favela," one of the hundreds of hillside shantytowns that cling precipitously to the hillsides of Rio.

A Rio favela typically came into being when squatters occupied steep "unbuildable" vacant land at the edge of the city and constructed shanties out of salvaged materials. The great wave of migration from the countryside to the cities from the 1940s to the 1970s was primarily responsible for the proliferation of favelas in Rio. Those rural migrants, poor and confronted with exorbitant costs for scarce land and housing, had little choice but to become squatters. Over time, some of these habitations have become massive, containing tens of thousands of residents each, as shown in the photo below. 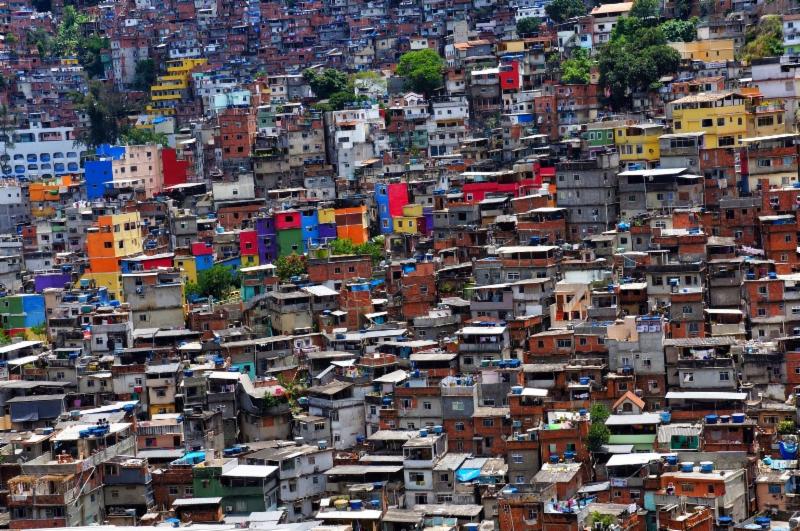 We hired a pair of guides, one who drove us in a Jeep up a steep mountain and deposited us at the top of a favela and the second who walked us down through the favela to the bottom of the hill where our Jeep was waiting. As we descended, we discovered a world we could never have previously imagined.
Favela housing generally begins with makeshift structures fashioned from wood scraps and daub. Over time more-durable materials such as brick, cinder blocks, and sheet metal are incorporated. Here's what we saw at the very top of the favela we visited. 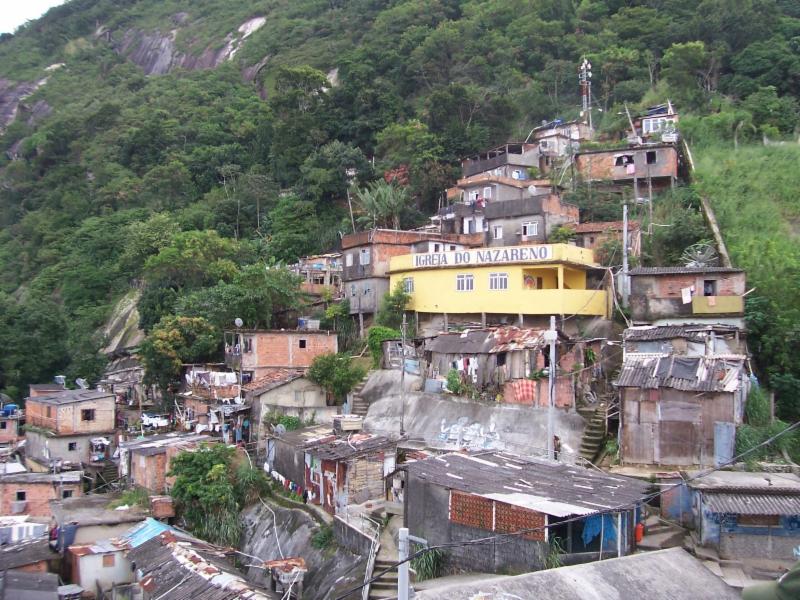 The lack of infrastructure within the favela gives rise to improvised and jerry-rigged plumbing and electrical wiring. Often water must be ported great distances, and rudimentary methods of waste disposal pose health hazards. As a result of the crowding, unsanitary conditions, poor nutrition, and pollution, disease is rampant in the poorer favelas, and infant mortality rates are high. Here's a photo of bootleg electrical and television cables we saw running up along the steps and sidewalks we were walking down. 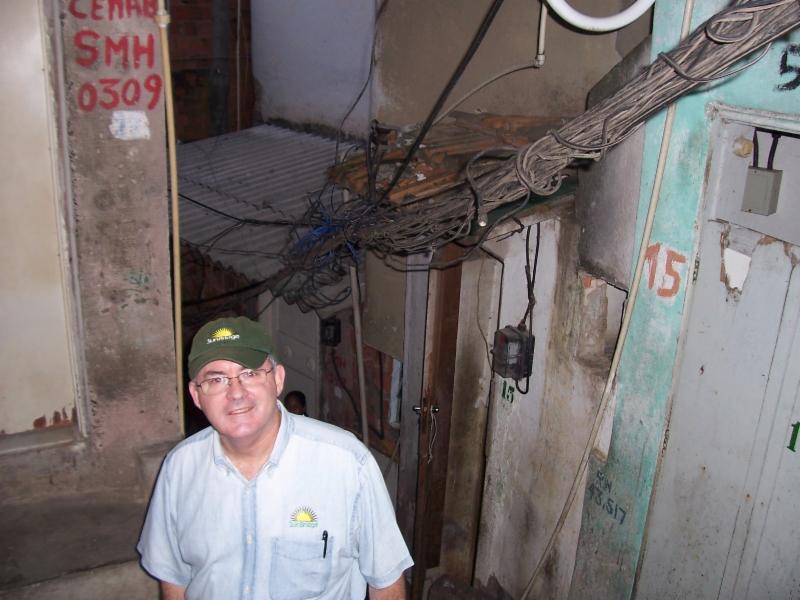 A wide variety of small businesses have sprung up in the favelas to serve the needs of the residents. Notice the signs advertising a barber shop and a woman's clothing shop in this picture. The second photo is of a small grocery store where we stopped to purchase snacks during our hike. 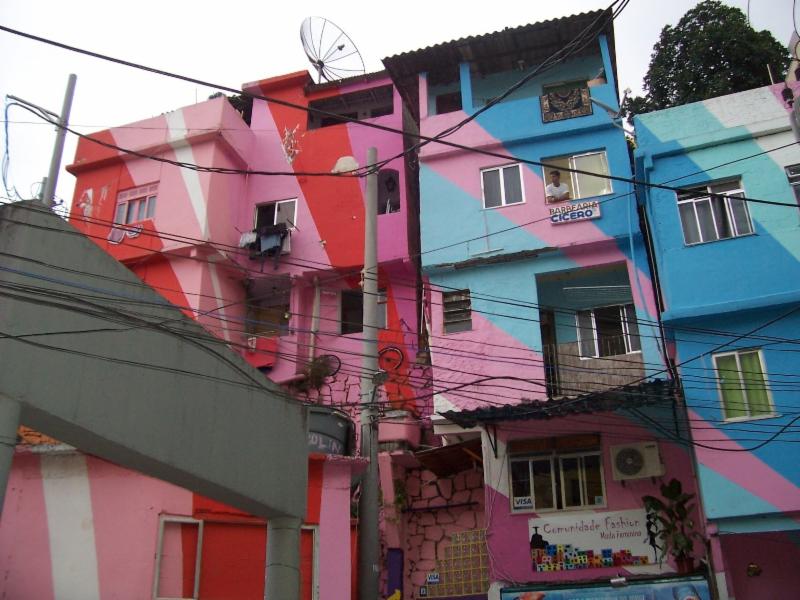 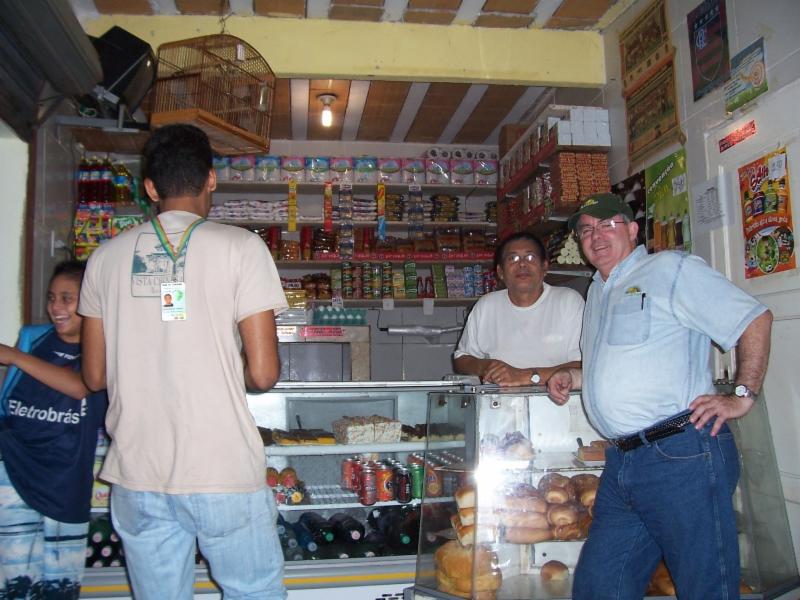 The favela we visited was considered relatively safe. Unfortunately, some favelas are crime-ridden and have long been dominated by gangs immersed in illegal drug trafficking. Police presence is sporadic, and local militias have developed in response to the gangs - only to supplant them in some cases in exploiting the favelados, as the residents of the favelas are known.

But all is not bleak. During our tour, my ability to speak Portuguese allowed us to interact directly with the residents and play with the children. We learned that people are people, regardless of where they live or what language they speak. They love their families and hope to make a better life for them. They appreciate it when visitors smile and show interest in them and spend a little money to support their businesses.

Paul and I learned that, like beautiful flowers growing out of cracks in impenetrable rocks, we will find people who are intent on making the world a better place if we look for them, even in harsh and dangerous settings. Paul enjoyed coming across a postage-stamp size soccer court built by Michael Jackson (yes, that Michael Jackson) where the children can play ball together with their friends and with an occasional norte-americano teenager wearing size 14 shoes. 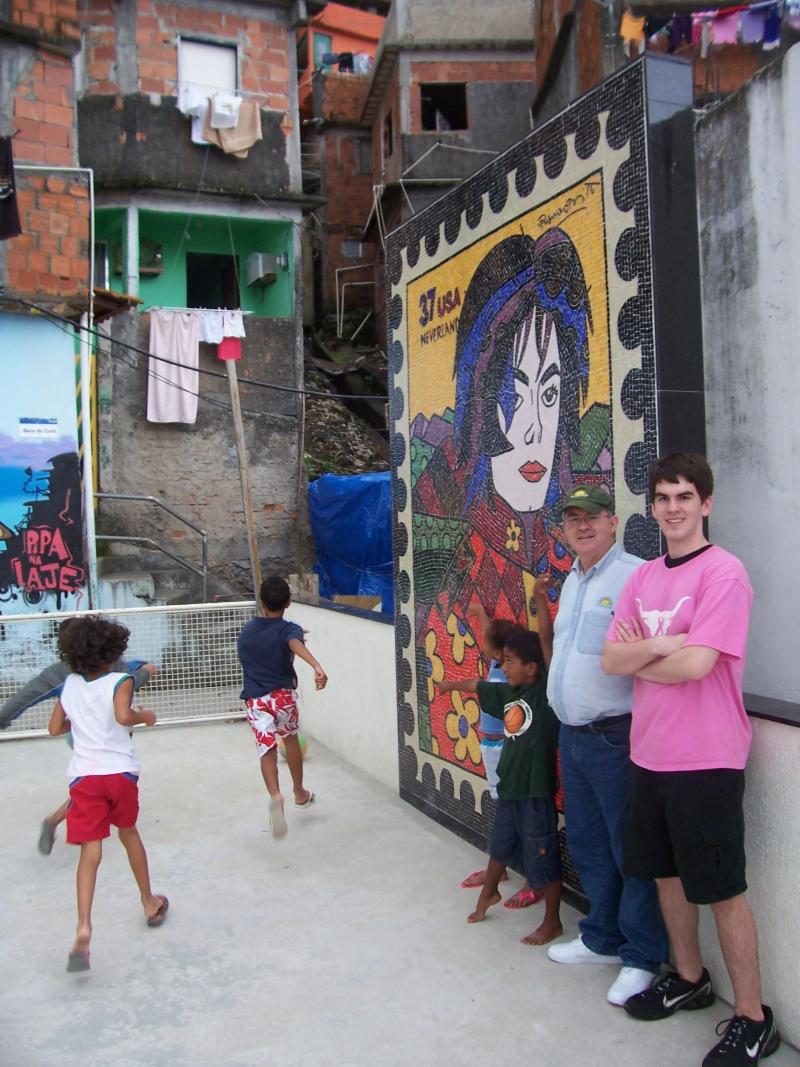 For me the highlight of our trek through the favela was discovering a music school where students - at little or no cost - can learn to play a variety of instruments. I asked the headmaster, a bright-eyed and cheerful fellow in his thirties, how a school like that came to exist in such a rough and tumble neighborhood.

Teaching music, he said, was his method of ministering to and attempting to change the tone and spirit of the favela. He believes that when a child of the favela picks up a guitar or a violin or a saxophone and starts to create music, even in this very ugly place where they've grown up, they become a different person. Over time, he explained, their own music-making changes them from the inside out. Music and the process of making music produces GENTILEZA within the student - a spirit of kindness and graciousness.

He pointed proudly to the wall of the school and to the T-shirt he was wearing. On both were emblazoned the school's motto. "I believe," he told me in very passionate Portuguese, "that GENTILEZA GERA GENTILEZA." 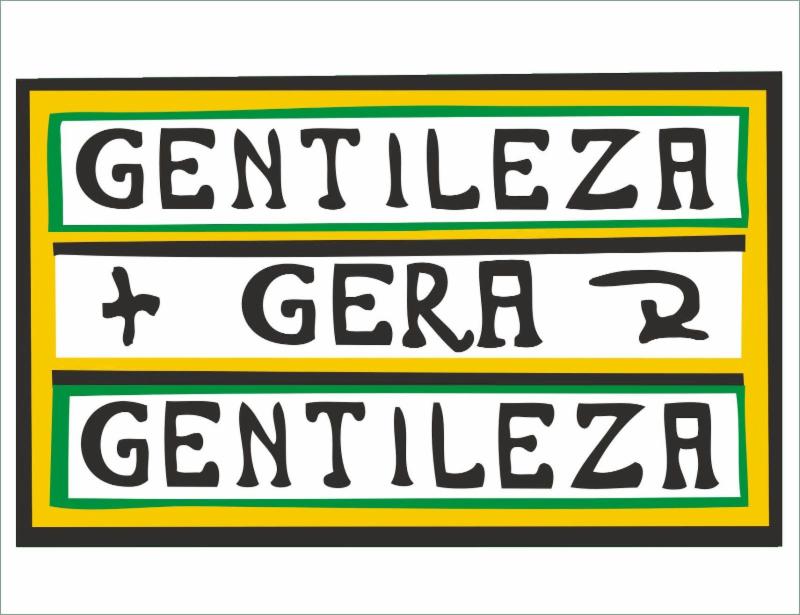 (GENTILEZA is a Portuguese word for which there is not a straightforward English translation. It means "the tendency to be kind and forgiving; the quality of being warm-hearted, considerate, humane, and sympathetic; an act of gracious kindness." The verb "gerar" means to beget, to generate, or to produce. A rough translation of the school's motto might be "Kindness and graciousness beget kindness and graciousness.")

As the music changes his students one by one and little by little, the schoolmaster believes they will begin to scatter GENTILEZA into a neighborhood that rarely experiences such things. This will in turn create a kinder, gentler community. Little by little, he said, his students and their music will change their world.

Was it making a difference? Based on the cluster of music students I spoke with, it was obvious their lives were enriched by the opportunity to learn music at the school. They had a smile on their faces and a gleam in their eyes. They had found an oasis in the midst of the harshness of life in the favela. They were flourishing among new friends, basking in the joy of making music, and thriving in the peaceful tone at the school. They were eager to sing the praises of their teacher and his gift of music and GENTILEZA.

What a powerful lesson I learned in such an unlikely setting! The Roman statesman Seneca wrote, "Wherever there is a human being, there is an opportunity for kindness." This young teacher was spending his life living and teaching this principle.

Looking back at that experience, I realize that his message of kindness is one we Americans could apply today in the midst of the coarseness of our current civic and social media discourse. Perhaps rather than looking for opportunities to be offended by someone's Facebook post or meme, to fight with strangers on the internet, or to play gotcha politics, we could decide to speak kind words, to be gracious, to look for the good in others.
If it's true that KINDNESS BEGETS KINDNESS - and I believe it is - then our GENTILEZA could be the catalyst for change in our little part of the world.
Posted by Scott Farnsworth at 7:00 AM No comments:

"The heavens call to you and circle about you, displaying to you their eternal splendors." Dante

We enjoyed a house full of children, grandchildren, and tons of fun this Christmas. That resulted in lots of cooking, lots of food, and in turn lots of leftovers. We finally finished eating all those leftovers on January 6, Three Kings Day.

But besides food, I have some leftover Christmas thoughts to share, one of which relates to the Three Kings and to a wonderful Christmas song I discovered this year called "Believe" by Josh Groban.   I love the melody and the lyrics, including these:

Speaking of ships sailing far across the sea, I find it amazing and miraculous that sailors can navigate across the vast unknown of the oceans by studying and following the guidance of little specks of light in the nighttime sky. That ancient discovery surely is one that changed the world. 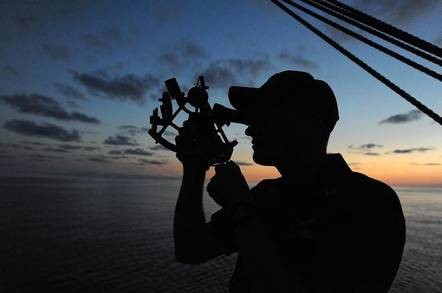 This phenomenon takes me back to the story of the Three Wise Men, who also trusted starlight to get where they needed to be. Here's the original story from St. Matthew:

Now when Jesus was born in Bethlehem of Judaea, behold, there came wise men from the east to Jerusalem,

Saying, where is he that is born King of the Jews? for we have seen his star in the east, and are come to worship him.

Then Herod, when he had privily called the wise men, inquired of them diligently what time the star appeared.

And he sent them to Bethlehem, and said, Go and search diligently for the young child; and when ye have found him, bring me word again, that I may come and worship him also.

When they had heard the king, they departed; and, lo, the star, which they saw in the east, went before them, till it came and stood over where the young child was.

When they saw the star, they rejoiced with exceeding great joy.

And when they were come into the house, they saw the young child with Mary his mother, and fell down, and worshiped him: and when they had opened their treasures, they presented unto him gifts; gold, and frankincense, and myrrh.

And being warned of God in a dream that they should not return to Herod, they departed into their own country another way. 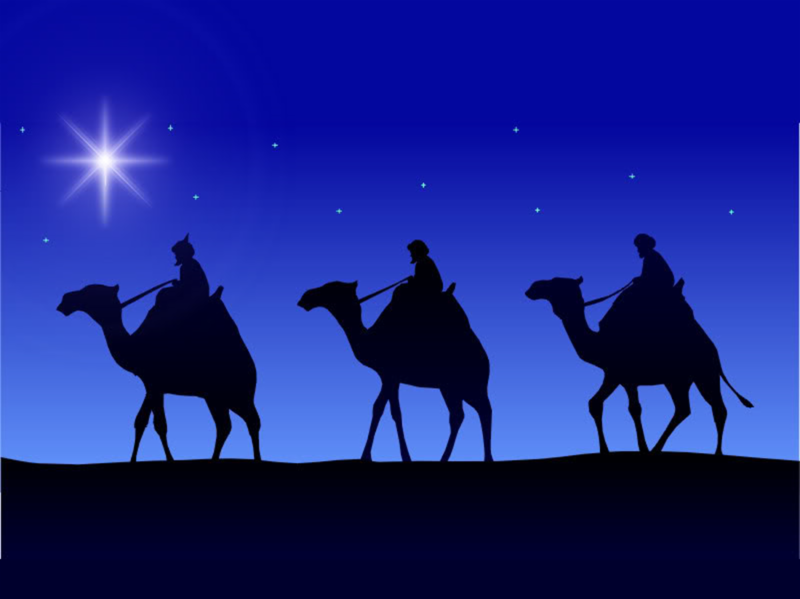 It's interesting how many of our modern-day Christmas traditions are based on the story of these nomadic "wise men" who used celestial guidance to find and worship the newly-born Lord, the true King of Kings. But there is a lesson larger than the giving of gifts that we can learn from these pilgrims. We learn that we can be led by divine means to our most cherished destinations.

Besides the stars, I believe that today we have available to us additional forms of heavenly light that can steer us away from dangers like the wicked King Herod and can guide us to truth and joy. I believe that we can navigate across the vast unknowns of our own lives by prayer and personal inspiration.

I believe that humble and sincere seekers of goodness - like the Three Wise Men - can receive celestial guidance to get where they need to be. I believe that, even when it seems that we have lost our way, we can find ourselves again, whether on Christmas Day or any other day of the year.