FARNSWORTH'S FIRST LAW OF LIFE, LEADERSHIP, AND VIKING SHIPS:  It's harder to keep the crew rowing if only the captain can see where the ship is going.

If you don't know where you're headed, you might end up somewhere else.
Yogi Berra 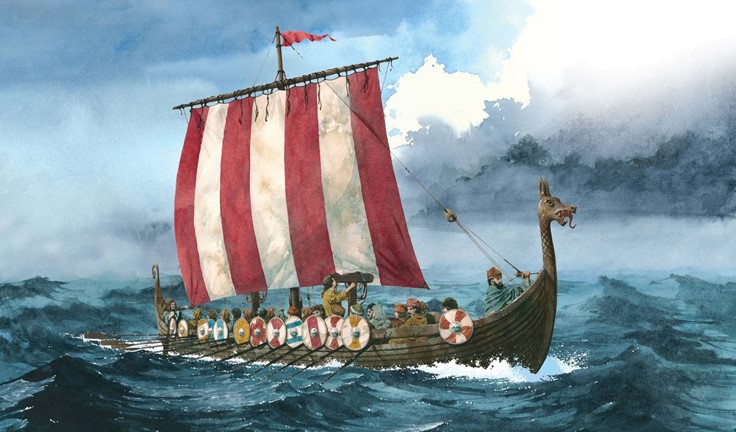 The workers in many organizations are like crewmen on a Viking ship.

They sit with their backs toward their intended destination and have no view of where they're headed. Only quick peeks over their shoulders or orders barked from a superior tell them if they're headed in the right direction. And yet they are expected to keep rowing, hour after hour, day after day.

Not surprisingly, many workers in a Viking-ship organization don't really deliver their best. They have to be prodded and cajoled. They come in late, stretch their breaks, surf the web on company time, and slip out as early as they can. They're there for the money and not much else.

Without a vision of the organization's big picture, many workers are dying a slow death of ignorance and apathy. They don't know where the organization is going and they don't care. They feel they can't change jobs so they end up chained to their oars like galley slaves.

They row, but they're gritting their teeth the whole time.

This is a serious matter. Viking-ship conditions can be dangerous not only to crew members but also to the organization's success and survival.

The second casualty in a Viking-ship organization is creativity.  Why imagine a better way when all you can see is where you've been? Why invent when you have no purpose but to survive? Why innovate when it produces no reward for you?

The third casualty in a Viking-ship organization is high-performance workers. Those with quality skills, self-drive, and strong resumes don't have to put up with such an environment and they find ways to jump ship. As they exit, the morale and productivity of those left behind nosedives.

With the loss of customer service, creativity, and high-performance workers, the Viking-ship organization goes into a death spiral. Like a ghost ship, it may continue to lurch forward for a time, but its long-term fate is sealed.

If you're a business owner or group leader, how can you avoid this Viking-ship phenomenon? Here are three suggestions.

Get clear about where you want your organization to go. If you don't know, there's no way the group can know. If you don't know, then finding out should be JOB ONE for you. Nothing else is more important. You need to take a retreat. Hire a coach. Have a heart-to-heart with your spouse. Cloister yourself with trusted lieutenants. Do whatever it takes to get clear on where you're going.

Share your ideas with your team. Tell them your "we've arrived story," the narrative you want others to be telling about your organization when you get to where you want to go. Tell it from your heart and your gut, rather than your head. Let them feel your passion and sense of purpose. Trust them with your vision.

Involve them in refining and implementing the vision.  Most people on a team want it to be successful and they've thought about how to make that happen. In my experience, when you empower your team to co-author the "we've arrived story," they make it their own and assume ongoing responsibility for figuring out the best way to make it come true.

If you allow your team to join you in defining success and identifying the pathway to it, odds are they will respond by finding a better way than you had in mind. Then they will man the oars with surprising zeal and commitment.

When you trust your team with your vision, they will honor that trust by charting the course, weighing anchor, and hoisting the sails. After that, it's full speed ahead. Your collective "we've arrived story" becomes a true narrative, almost as if by magic.

Wednesday Wisdom: Farnsworth's First Law of Life, Leadership, and Road Maps - If You Don't Know Where You're Going, Any Map Will Do