Wednesday Wisdom: Where is Your Heart Today?

WHERE IS YOUR HEART TODAY?

"Brother-
You went away so suddenly
No time to say goodbye
But brothers can't be parted
Precious memories never die."
Anonymous

Tomorrow on Valentine's Day, my heart will be with my eternal sweetheart Marcie. But today my heart is with someone else. 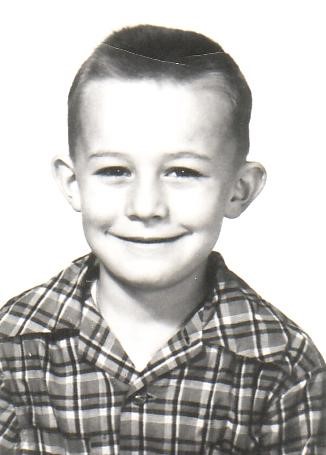 The smiling little boy in this picture is my older brother, Alan Farnsworth. He and I were 15 months apart in age and best friends. Today would be his 68th birthday had he not been struck and killed by a drunk hit-and-run driver while riding his bicycle in Fruitland, New Mexico, on February 20, 1959.

It was a Friday afternoon exactly one week after his eighth birthday. Our family had big plans for that evening. Our mother was coming home on the bus from Albuquerque where she had spent the past week (like she did every week) receiving cobalt treatments for her throat cancer. We were going to meet her at the bus terminal in Farmington and go to a movie, an exciting treat for us.

Alan, the oldest of five sons, decided he would ride his bike half a mile up the road to our dairy barn so he could help Dad by feeding the calves. That way, Dad would get finished a little earlier, which would put us at the bus stop a little sooner and give us a few extra minutes with Mama before the movie. Alan was always thoughtful and considerate like that.

I told him to be careful, watched him pedal up the road for a minute or two, and then went back to playing marbles. He never made it to the barn and, as far as I know, I was the last person to see him alive.

A short time later I heard sirens from up toward the barn. From the end of our driveway I could see some commotion in the distance, but it didn't occur to me that it involved Alan. We learned what happened a bit later from our aunt who lived across from the barn.

For her safety, Mama usually sat right behind the driver on those long and lonely bus rides back and forth from Albuquerque. At the moment Alan was hit by that car, our mother felt a sudden jab of pain - not physical but based more on a mother's intuition. She told the driver she knew something bad had just happened to one of her children. She carried that fear in her heart until the bus arrived in Farmington and my father broke the tragic news to her.

I don't know how my parents bore the painful load they shouldered. Children aren't supposed to die before their parents, and tragedies aren't supposed to pile up one on top of another. Yet they had lost their oldest child in a senseless accident, all in the midst of my mother's arduous battle with a fierce form of cancer that would claim her life two years later.

For my part, I was left bewildered and stunned; it was a lot for a 6½-year-old to deal with. But I did have a tender and child-like faith in what my parents had taught us: we were a forever family and death was but a temporary separation. I knew then that their teachings were true, and I know it even more so today.

I'm aware that some people don't believe in life after death, but I've never been in that camp. I've received enough evidence in my life to convince me that we will live beyond the grave and that we will know and love those we have known and loved here. I'm convinced that Alan and I will always be brothers, and when I pass through the veil, he'll be waiting for me and we'll have lots of catching up to do.

When I try to imagine that heavenly meeting, I wonder what he will think of me and the life I've lived in the 60 years since his accident. I'm anxious to find out whether he's been able to keep an eye on me from his heavenly perch, or if I'll need to fill him in on this interesting journey I've been on. If he's had an angel's-eye view of my life, I'm sure I've made him proud on some occasions but disappointed him on others. Of course, I'll want to hear what he's been doing since that fateful Friday afternoon in Fruitland, New Mexico.

What a grand reunion that will be! So much to talk about!

Happy 68th birthday, my dear Brother. I look forward to seeing you again.
Posted by Scott Farnsworth at 1:30 PM