It's a lot easier to keep your balance when you're moving forward.

My brother Lane has led hundreds of horseback trips into the San Juan Mountains in southwest Colorado in the past 40 years. He knows the mountains and he knows how to handle horses.

Lane has found that experienced mountain horses generally work hard and are well behaved as long as they keep moving along the trail. However, if the trail boss loiters too long at the trailhead or stops too long or too frequently along the way, the horses start biting, kicking, and shoving each other. (There's a reason it's called "horseplay.") If that happens, Lane says, the leader must get the group back on the trail and moving forward as soon as possible.

According to Lane, the keys to successfully leading a train of pack horses are to (1) know where you're headed, (2) get moving, and (3) keep moving steadily toward your destination. Even though he's not likely to use or recognize the term, Lane understands and employs the underlying principle of Farnsworth's First Law of Life, Leadership, and Bicycles: "It's a lot easier to keep your balance when you're moving forward."

Lane and Scott on the trail in the Weminuche Wilderness in Colorado.

This principle pertains as much to humans as it does to horses and bicycles. Individuals, families, and work groups who apply the concept are more likely to be successful, while those who don't do so tend to be less successful.

I once worked with the head of a large organization with 10 divisions and 3,000 members. He had no clear vision of where the organization was going and was not enthusiastic about defining his vision, much less communicating it to the people in the organization.

As it happened, there were always plenty of troubles and fires for him to handle. It seemed to me that by focusing on problems, he attracted more of them.

At the same time, the lack of forward momentum caused the energy of the organization to be dissipated on petty internal concerns. Without direction and a forward-focused vision, the organization languished and the people in it were constantly squabbling, getting into mischief, and spawning emergencies. Dealing with these issues took even more of his time and made it even less likely that he would ever establish a clear vision of where they were going.

I have observed that heads of organizations who lack "that vision thing," as George H. W. Bush described it, have a difficult time rallying their troops or keeping them out of trouble. King Solomon wrote that "where there is no vision, the people perish." Proverbs 29: 18. Usually they die from marching in endless circles, from starvation, or from constant infighting.

Such officers may be in charge of organizations, but they are not leaders. Being a leader requires purpose, vision, direction, and forward movement.

The concept that it is impossible to keep a non-moving bicycle upright is not very complicated. As a former student once derisively described it, this principle is "stupidly simple and 'duh' obvious." "Everybody knows that!" he said.

And yet, knowing that, how often do we find ourselves in a swirl of crises because we don't have a clear vision and purpose?

How often do we get bogged down in a swamp of minutiae and trouble because we forget to focus on our primary objective?

How often do we allow interruptions and distractions to divert our attention and throw us off balance, draining precious energy and resources away from our main mission?

Sometimes, even if we don't yet know all the answers to how we're going to get to where we want to go, we simply must put one foot in front of the other and start moving.

Often the answer is to just "head 'em up and move 'em out."

When we do, we often find that forward momentum itself resolves or makes irrelevant the nagging issues that previously kept us paralyzed.

Forward momentum itself gives us the energy to break through barriers that once seemed insurmountable.

Forward momentum itself takes us to a place where we can see clearly how to reach our ultimate objective.

Sometimes the solution to our quandaries is to get on our horses and start riding toward our destination.

Or as Lane would say: "Mount up and let's get moving!" 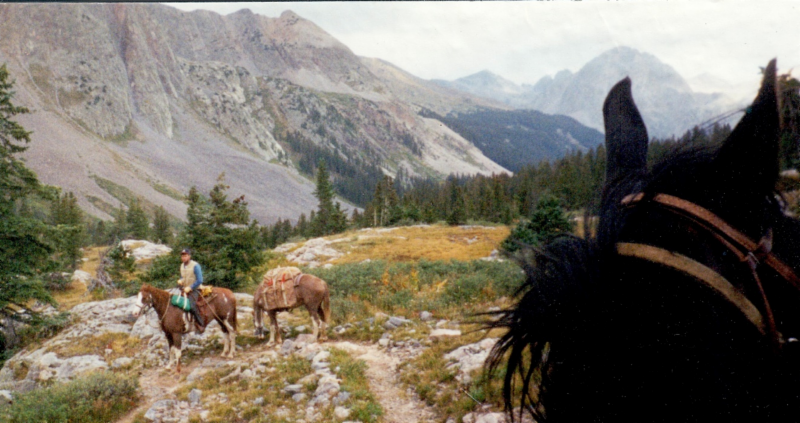 Posted by Scott Farnsworth at 10:49 AM