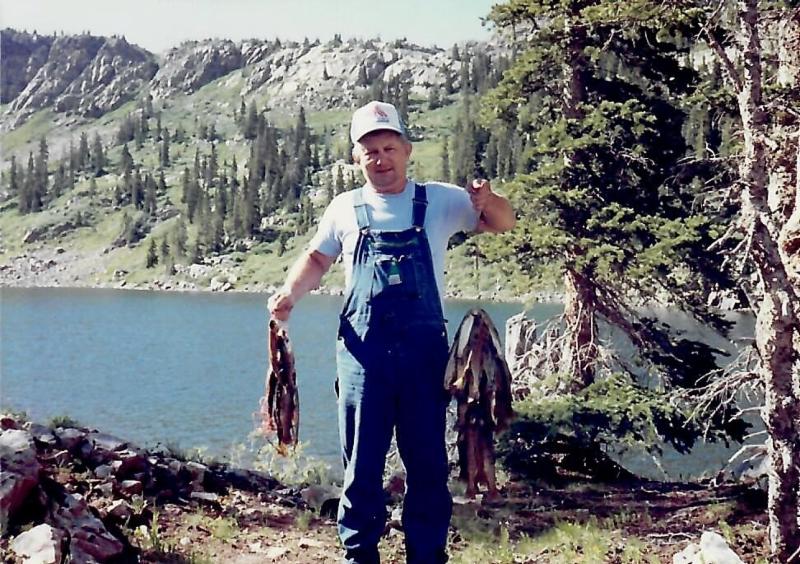 I first observed this principle in action from watching my good friend Gary Norton back in Brookhaven, Mississippi. Among his numerous talents, Gary loves to fish. Regardless of when, where, or what kind of fish or fishing - Gary is there with passion.

Gary taught me how to fish for bream in small ponds, so I could take my young children fishing and not disappoint them.

Gary showed me and a bunch of Boy Scouts how to catch sea trout and red fish under an oil platform in the Gulf of Mexico.

He took me bass fishing where I observed how the competitive "big boy" fishermen do it with fast boats and fancy rigs.

Gary shared with me the finer points of trotline fishing in the Mississippi River for the monster catfish that live in its deep and muddy waters. You haven't lived until you've wrestled a 40-pound catfish into a very small boat on a very large river. Talk about adrenaline rush! 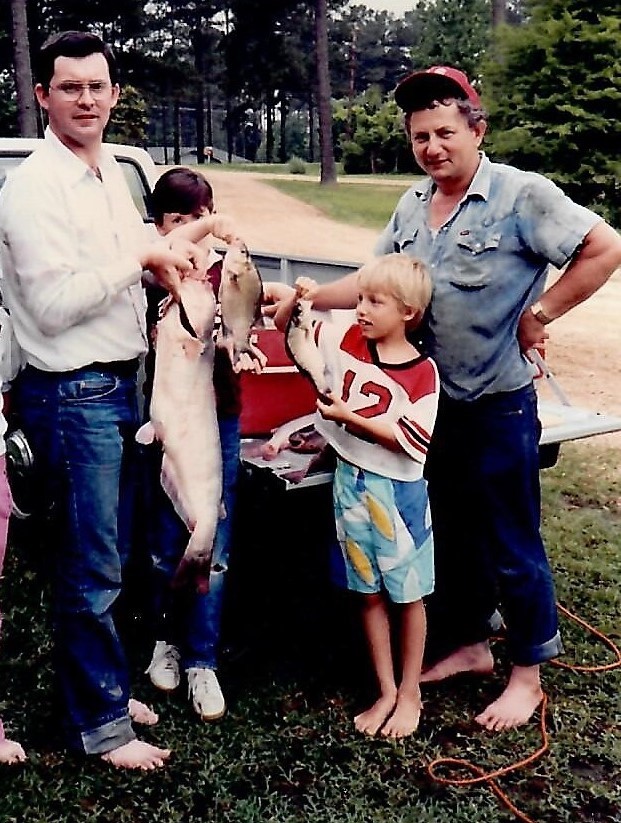 I took him to the high-altitude streams and lakes of Colorado, away from his native fishing habitats, thinking an entirely new kind of fishing might slow him down a bit. Not so. Within 30 minutes, he was out-fishing those who grew up in the area. He just has a nose for fish. 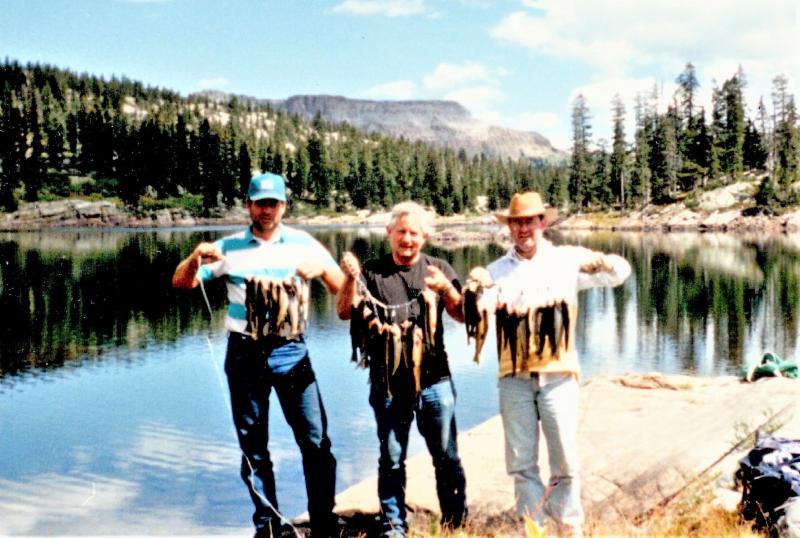 Due to his kind and generous nature, Gary always had a large circle of friends. If you were in that fortunate number, you could count on a steady supply of Ziploc bags filled with fresh fillets. Like an unselfish gardener who raises more than his own family can eat, Gary felt the need to share his abundance. He kept our freezer - and a lot of other freezers - stocked for years. He literally fed the entire village.

This principle of employing a person with passion applies to building a world-class business, a championship team, or an exceptional volunteer organization. The secret is to be on the lookout for people with passion in your field and when you find them, put them to work. You can teach skills and processes but you can't teach passion. Without passion, world class is out of the question.

This principle applies to improving your existing team. You probably already have passionate people around you. Make sure they are in the right slot, and search constantly for ways to allow their passion to energize their work and your organization. Eliminate barriers to creativity and honor exceptional contributions.

This principle also applies to you personally if you're trying to create a topnotch life for yourself or a better world for us all. Do what you love and love what you do. Find your passion and nurture it, and in short order the rest will follow.

Here's a quote I love:

Whether it's fishing or photography or fighting cancer, find your passion and purpose and let that bring you to life. Then surround yourself with other passionate people and turn them loose to be their best. Remember Farnsworth's First Law of Life, Leadership and Fishing: Find a man with a passion for fishing and he will feed the entire village. You need to live this principle; your village needs it; and the world needs it. 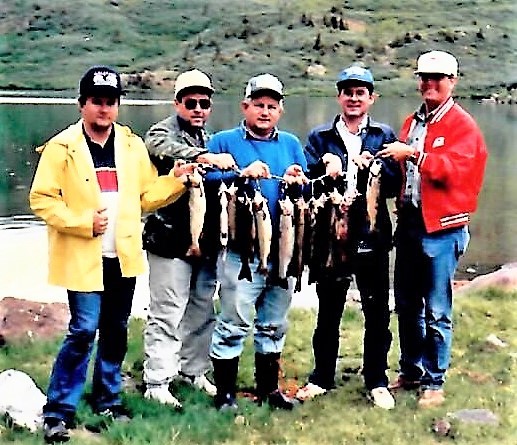 Posted by Scott Farnsworth at 4:59 AM No comments:

FARNSWORTH'S FIRST LAW OF LIFE, LEADERSHIP, AND ROUGHNECKS:  Everyone you meet on the road of life has something to teach you; slow down and listen. 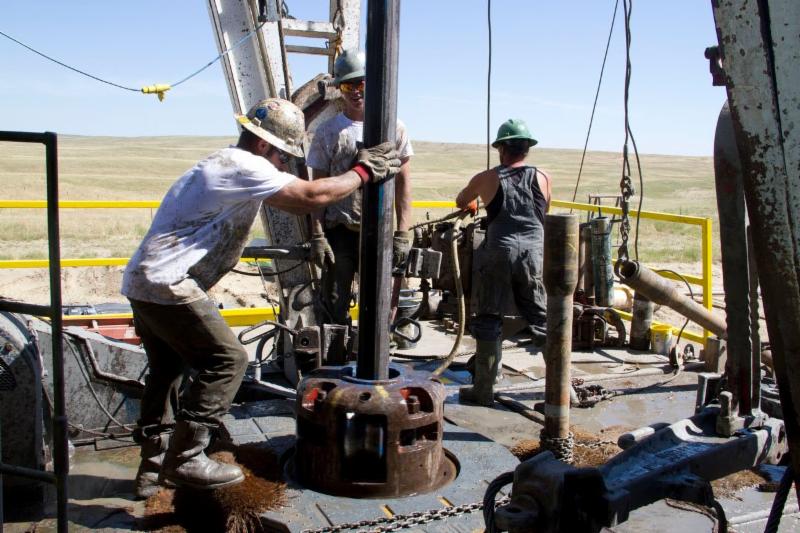 I'm still not sure how I survived the summer of 1974 on a "workover" or production oil rig (as distinguished from a drilling rig) in western Colorado. The work was back-breaking and conditions were dirty and dangerous. But it paid well, and I needed the money for college, so I stuck it out.

I learned a lot from the colorful crew I worked with. Probably the most useful lesson those roughnecks taught me - a once-in-a-lifetime nugget from the most unlikely of sources - came on a blistering August day when I first experienced "pulling a wet string."

On the rig, no one had a name, only a nickname, a nom de guerre. At 22, I was the "Kid." If I had stuck around a little longer I might have earned a more substantial moniker, but everyone knew I was just summer help. I was definitely the odd man out in terms of lifestyle, being the only one who didn't smoke, drink, or chew. I'm pretty sure none of the others had ever set foot on a college campus or imagined going to law school.

"The Driller" or "Drill" was in charge of the crew. He wasn't much older than I but had been working on rigs since he was 14, and he was a crackerjack rig operator. He worked hard and he drank hard. On Monday mornings he liked to sing a ragged, raspy rendition of James Brown's "I Feel Good, Like I Knew That I Would." It was his way of convincing himself that his blood-shot eyes and hangover weren't all that bad. His goal was to move up to "tool pusher" - the guy who got to drive a company pickup from rig to rig and bark orders at crews like ours. 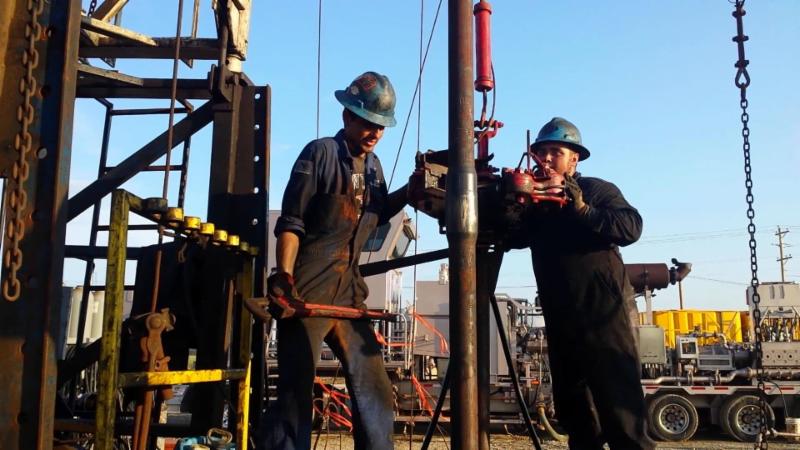 "Grody" (named for his thick, dirty mustache that seemed to catch a piece of everything he ate or drank) was the other deck hand besides me. He was the old man of the crew, having been around the "oil patch" for nearly 20 years. He was quietly comfortable on the deck, but had no ambition to be in charge of the crew. He spent most of his weekly paychecks on weekend binges with his live-in girlfriend Teresa.

"Red" was the derrick hand. He had bright orange hair, ruddy complexion, and only one eye. He danced along a narrow perch 50 feet in the air, catching sections of tubing as they were winched up from the wellhead. He liked playing practical jokes like spitting Red Manchewing tobacco down on Grody and me from above. Grody would swear at him and threaten all forms of obscene bodily harm, but Red would just laugh. He knew Grody was afraid of heights and couldn't come after him up in the derrick. 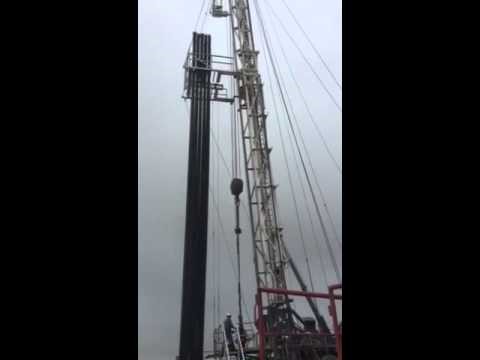 Normally when we pulled the 2¼ miles of tubing (called the "string") up out of the well, the pipes were dry and empty because the pump at the bottom had been unseated and all the crude oil inside had run out into the well. On rare occasions, however, the pump would get stuck in the bottom of the string and the oil was trapped inside. That made that 2¼-mile-long string of pipe "wet": i.e., completely full of dark-green crude oil.

"Pulling a wet string" was one of the vilest things that could happen on a workover rig like ours. As we started pulling the tubing full of oil up from the well and unscrewed the first 50-foot section at the derrick floor, several gallons of crude oil sprayed all over us and the deck. Then each time we pulled up and unscrewed another section, we were showered again.

By the third or fourth time, our clothes were saturated and oil was dripping from our hair, off our hardhats, and onto our faces and necks. Our eyes were stinging and we wanted to wipe them but our gloves were heavy with oil too. Crude oil was already oozing inside our steel-toed boots and underwear. Everything we had on was ruined and would need to be burned at the end of the day.

The deck and all the tools were slick and oily. Our brains were screaming to hurry up and get this over with, but the slimy conditions forced us to move slowly and carefully so no one would get hurt. It was like a slow-motion nightmare - trying desperately to flee but feeling like we were running through Jell-O.

After half a dozen nasty oil showers a terrible thought hit me: it wasn't even 9 a.m. yet, and there was still more than 2 miles of wet string to go. That meant enduring over 200 more sprays of oil until the last sections were finally pulled from the well. Without a doubt, I thought, this was going to be one of the nastiest, most wretched days of my life.

Around noon we stopped for lunch and were squatting in the shade, dripping oil and eating our sandwiches with greasy fingers. No one felt much like talking. The Driller finally broke the miserable silence.

"The worst," I snorted. "If I had known this was going to happen, I would have quit yesterday."

"Oh, really? We get an extra fifty bucks?" I asked.

"Yeah," Red explained. "They say it's to buy new clothes, but it's really just to keep the whole crew from twisting off." (That's oil patch lingo for walking off the job en masse.)

"Aw, this ain't nothin'," added Grody. "You should try doin' this in the middle of winter. Happened to me about three Januarys ago on a well over near Steamboat. Nothin' like frozen oil dripping off your nose all day. Kinda like oil icicles. Now THAT was a rough day."

"This is so disgusting. How can you stand doing this year after year? Why don't you get another job, do something different?" I queried.

Driller scrunched up his face and almost rolled his eyes at me. "That's what you ain't figured out yet, Kid. It don't matter what you do or how much school you've got, every job's gonna have its share of wet string days.

"Every now and again, even if you're some hot-shot attorney in a three-piece suit at a fancy law firm in downtown Denver, even then, s*** happens. It don't do no good to try and run from it. You just gotta learn to make the best of it."

"He's right," Grody echoed. "Every job's gonna have its share of wet string days. Take the good with the bad and deal with it."

Their words still ring in my ears. I can't say that I appreciated their wisdom that day, but it did stick with me.

Over the years I've found their words to be true. Even the best of jobs, even the best of lives, have their share of "wet string days," days when the motor blows up, the wheels come off, and everything falls apart.

I've discovered that it helps to have a name for those kinds of situations. When something's labeled, it's easier to recognize it, talk about it, and find a place for it in the grand scheme of things.

I've learned that life is not about avoiding "wet string days," because you can't. Life is about learning to handle them when they happen and not letting them sour you for the majority of days when the pump doesn't get stuck in bottom of the tubing and the pipes aren't full of oil and you don't have to burn all your clothes at the end of the shift.

It's about finding joy in the journey. It's about learning some amazing lessons from the interesting people you meet along the way. Bless those roughnecks and the lessons they taught me 44 years ago this summer.
Posted by Scott Farnsworth at 7:25 PM No comments: